So you’ve decided to take on the messy mayhem of bun making with kids? Give yourself a pat on the back! It will take a few hours and be extremely messy but the results are totally worth it!

About a year ago the lovely librarian in our local library offered us a CD of nursery rhymes which they were about to throw away. Naive 2017 Catherine thought ‘why not? It’ll be nice to have some nursery rhymes while we drive’.

It’s now been a year since I’ve had the radio on in my car and I’ve heard the Current Bun song 67,352 times.

As I say these do require a bit more effort but they taste amazing and have been described as ‘a little bite of heaven’!

If you have a stand mixer feel free to make you dough using your mixture and dough hook attachment. I foolishly opted for the old fashioned bowl and spoon method which, although brilliant fun, did result in my scraping air dried bun dough off my dining chairs for a considerable amount of time.

In a jug, combine the water, sugar and yeast, and sit for 5 minutes until the mixture becomes a bit frothy.

In a large bowl add the flour and stir in the yeast mixture. Whilst stirring, add the milk, egg and melted butter. Mix with your hands until a VERY sticky dough forms.

Knead the dough for about ten minutes or until smooth and elastic. This is when we like to play Spider-Man as the stickiness level is intense!

Add the sultanas, cinnamon and orange zest. Give a much quicker knead to incorporate these into the dough. Plop into the bowl and cover with a tea towel.

Pop in a warm place for an hour (near a radiator or a warm windowsil are my go-to choices) or until doubled in size. In the meantime line 2 baking sheets with baking paper .

Separate the dough into 8-10 even sized balls and pop onto the baking sheets giving plenty of space in between. Loosely cover with a greased sheet of film and leave in a warm place again for about half an hour or double the size.

Mix the plain flour and water together to make a thick paste. Pipe or drizzle the paste over the buns to create a cross.

Bake for 15-20 minutes or until raised and golden.

Spoon the apricot jam into a microwave safe bowl or mug and heat for 15-30 seconds or until runny.

Whilst still warm from the oven, gently brush the tops of the buns with the jam.

Make the dough as per the above but at the point of adding the fruit add the zest of 1 orange and 100g chocolate chips or chunks.

Proof and bake as above and glaze with a little maple syrup. 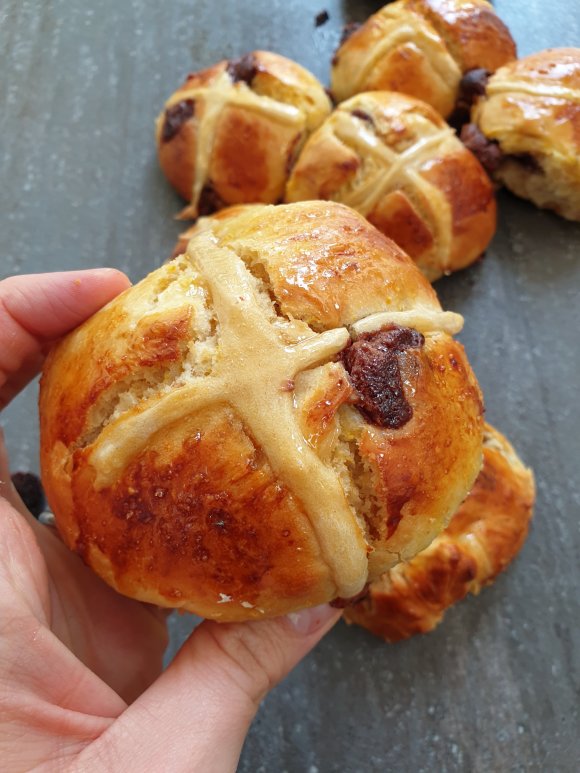 It looks like much fun was had with this 😊. The recipe doesn’t look as tricky as I expected, and I like the addition of the apple.

It was great fun! I’ve got some videos over on our Instagram account 😀 even the baby got involved ❤

Ha, I’ve learnt so much about social media since I started blogging! I prefer Twitter to Facebook now, though, and I’ve picked up some great pointers from other bloggers on there. I could spend hours on Pinterest, come and find me on there when you’re set up, I’ve started a kid’s recipes group board to help share people’s pins

Definitely will do thanks 😀

This site uses Akismet to reduce spam. Learn how your comment data is processed.

In an attempt to keep the kids happy and quiet I’ve found we spend at least an hour a day in the kitchen. If its not baking its another form of messy play or splashing about with the sink.

At best baking with kids is a stimulating and diverting screen free activity which encourages sensory development and aids knowledge of cause and effect, increases curiosity and is an all round brilliant way to enhance cognitive skills.